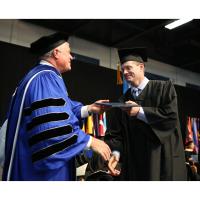 Menomonie, Wisconsin —  After 17 years attending college on and off, Melvin “Sonny” Winberg walked across the commencement stage Dec. 16 at University of Wisconsin-Stout.
Winberg, 42, of Harris, Minn., graduated with a bachelor’s degree in career, technical education and training.
He started college around 1999-2000 at UW-Stout but then transferred to UW-Superior. He would take some classes but then take time off to work.

In 2007 he won a contest to go to Nashville with Capitol Records, ending up in the top 10 of the national contest and allowing him to perform in the Country Music Hall of Fame. He then started the country band Hillbilly Mafia. He sang lead and played guitar. The band performed until about 2012.
“It was a good experience, but I wanted to spend more time with family, and it was tough being gone with the band,” Winberg said, who is married to spouse, Becky, and has two sons, Nolan, 7, and Kyle, 5.
Winberg said he always planned to return to college and finish his degree.
“I was an Eagle Scout,” he said. “That taught me if you start something, you finish it. I was trying to set a good example for my kids to put your mind to something and finish it.”

Winberg also met Chuck Bomar, dean of the UW-Stout College of Science, Technology, Engineering, Mathematics and Management, who along with Winberg’s cousin, John Hawksford, encouraged him to get his degree.
“They told me how important education was and how you can’t take it away,” Winberg said. “I decided to keep chugging.”
Bomar said he met Winberg through shared hunting land, owned by Winberg’s uncle, near Cable. Bomar would talk to Winberg about the classes he was taking and encouraged him to finish school.
“I give Sonny a lot of credit — persistence and patience have paid off,” Bomar said.
Winberg, who works full time at Cummins, an engine company as a field service technician repairing generators, needed a flexible schedule to accommodate his work and family life.
He started taking online classes at UW-Stout around 2012 to fit school in with his busy schedule. “For me it was very important, because it was at my own pace,” he said. “You can schedule your school around your schedule.”
Matthew Simoneau, director of the CTET bachelor’s program, said it’s typical for students who are juggling full-time careers and families to take years to finish their degrees.
“They are full-time working adults. With the flexible program they are able to finish,” he said.
The first time Simoneau met Winberg in person was graduation day.
Even though it may take time, most students entering the program said they always intended to finish college, Simoneau said.

Winberg encourages others who want to return to school and finish college to do it and work toward their own goal.  Now that he has earned his degree, Winberg wants to teach in the repair field at a high school or a community or technical college. He has a technical degree in auto repair from Wisconsin Indianhead Technical College in Rice Lake.
When he was handed his diploma on graduation day, Winberg was relieved. “It was relaxing to be done," he said.
Learn more about the CTET Bachelor of Science program at www.uwstout.edu/programs/bsctet.
###
Photo
Melvin Winberg receives his diploma Dec. 16 from Chancellor Bob Meyer during commencement at UW-Stout. Winberg spent parts of 17 years working toward his degree.
Contact:
Pamela Powers, University Communications
715-232-2381
Events Calendar MarketSpace
Go mobile with MyChamberApp!